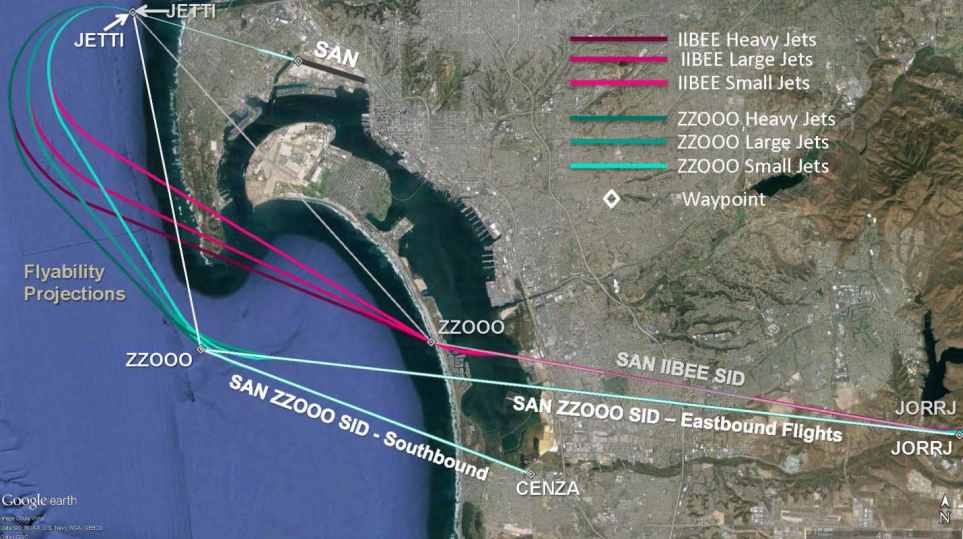 September 2, 2016: The FAA has released the Final Environmental Assessment for the SoCal Metroplex. Within this 140 page document, our goal of “retaining LOWMA or better” has been accomplished with the replacement of the “POGGI” departure route with a new “ZZOOO” departure route (“SID”) that includes a new waypoint (“ZZOOO”) that moves the eastbound turn at Point Loma farther south (2.0 miles).

Excerpt: The location of ZZOOO waypoint is nearly identical (1.4 miles FURTHER south) to the location of LOWMA waypoint. The ZZOOO waypoint was placed in a location designed to ensure aircraft flying the ZZOOO SID remain west and south of the Point Loma peninsula as they make the turn toward the east. It is still important to note that ATC may reroute aircraft off the ZZOOO SID as needed for separation and safety.”

What does this FAA decision mean:
In September 2015, the initial outcry from the peninsula communities was in response to the FAA’s Draft Environmental Assessment (“EA”) for the SoCal Metroplex. Contained within that document was a proposal to replace one of the two westbound standard instrument departures (“SID”) known as “POGGI” with IIBEE. The primary change was the elimination of a waypoint (a crossing of specific latitude and longitude) known as “LOWMA” that is located 1.5 miles WSW of the tip of Point Loma that flights conforming to the SID must “fly by” – nearby but outside. This waypoint is the reason that approximately 45,000 flights a year do not fly over the peninsula as they turn eastbound which would negatively impact Cabrillo National Monument, Fort Rosecrans, the tidepools, PLNU, etc. As we learned more about the issues, we realized that there were also significant issues with the day to day operations with the initial departures; low and loud, fanning, and later upon learning about the 1998 Red Dot Agreement, violations of the restricted areas. At this point, we had two separate but interrelated issues to pursue; 1) SoCal Metroplex and the need to retain “LOWMA or better” to protect the lower peninsula; this was a FAA Washington D.C. and FAA Los Angeles regional issue, and 2) FAA’s local Air Traffic Control management (“TRACON”) and the need to reverse the negative increasing trends impacting the communities and improve the day to day operations; this is a local TRACON matter. So, Friday’s announcement within the Final SoCal Metroplex EA, whereby the, POGGI SID will be replaced by a new SID called “ZZOOO”, which retains JETTI off the OB pier but adds a new waypoint 2.0 miles south of the peninsula (1.4 miles further south of LOWMA) is a very significant victory for San Diego’s treasured assets on the Point and for residents on the peninsula. We prevailed on our goal of “LOWMA or better”- the peninsula fly overs will NOT increase by 45,000 flights per year! And, yes, there are numerous and material flaws in the EA (it is an insult to the Environmental Assessment process) that would provide multiple grounds to challenge its findings yet, for the peninsula’s interests, we prevailed.

Please also note that this victory is the result of thousands of letters, emails and phone calls from the community, multiple public and private meetings but also, as I can speak from personal involvement, the result of direct significant assistance from and leadership by Rep. Scott Peters, Mayor Kevin Faulconer, Supervisor Greg Cox and Council Member Lori Zapf, as well as the involvement of Sen. Feinstein and Boxer.

HOWEVER, please be aware that this decision will have NO impact on improving our day to day experience, it will not impact compliance with the Red Dot Agreement, and will only create new opportunities for TRACON to release flights off of the new ZZOOO SID, to turn over the peninsula.

Our efforts to effect day to day change continue and will be pursued with help from the new seat on the Airport Noise Advisory Committee (“ANAC”) now filled by Fleetridge resident Melissa Hernholm Danzo, and new Mission Beach representative Debbie Watkins. Additionally, we are hopeful that the new subcommittee, to be chaired by Ms. Watkins, will allow for a direct and positive dialog with TRACON (they have publically committed to participate) and a productive format that will allow us to collaborate on solutions to the day to day operational issues. So, “LOWMA or better” is a significant win, but there will be several more innings in this ball game before we will rest.